HomeblogUncategorizedChange in a changing world

Change in a changing world 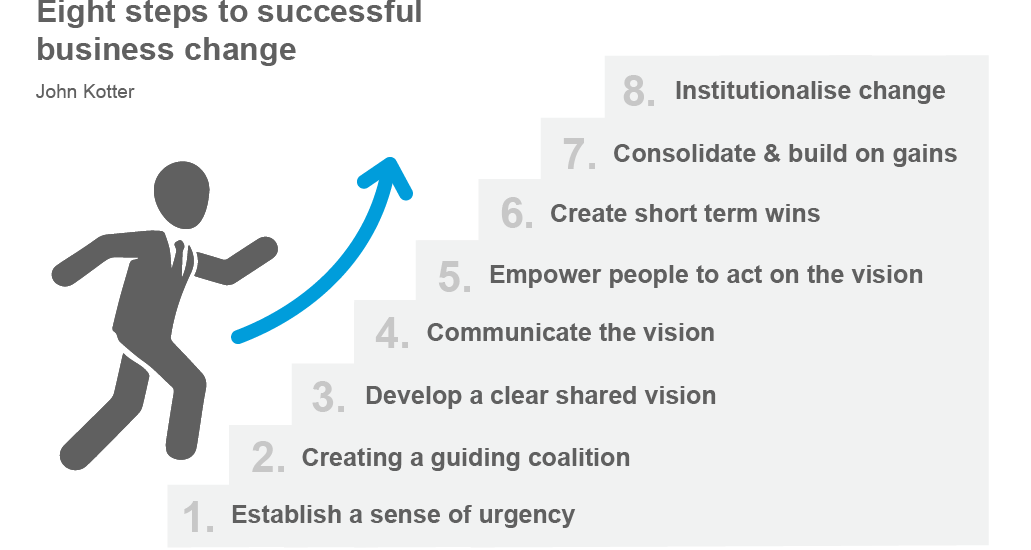 We are surrounded by change; change may arrive as a gentle breeze or as a violent hurricane and may be planned or unplanned. Today the UK is going through a major change in the form of Brexit and we are potentially going to witness more and bigger changes in a matter of weeks than we have in decades.

As consultants we are used to change and often use Kotter’s 8 step model to give insight into how to deliver a successful change project.

So how does Brexit compare?

Can anyone say that there was a clearly developed shared vision or a guiding coalition?  Kotter would suggest that this is one of the earlier steps, without which anything else is going to stumble. Had Brexit been seen as a change management programme, then this is where the effort would have gone in 2016 and 2017. In any change programme this is crucial and a step that is often rushed in the excitement of wanting to see things happen.

The middle stage of Kotter’s Change Model is about demonstrating the vision and this is where we need leaders to step in. They need to build optimism and self-confidence, recognise and reward achievement and sell the benefits, instead of drawing all the focus on structure, policies and processes. The last step of engaging and enabling is for leaders to show short-term wins in order to embed faith in the change. It is too early to draw conclusions on this around Brexit and this is an analysis it is undoubtedly wise to keep clear from at the moment!

It is probably safe to say, however, that Brexit hasn’t gone as a Project Manager might have wanted it to go!  If, as we do on our projects, you refer back to the 8 steps, it is easy to see why this might be. As a warning it might be wise for our politicians to refer to the model and to the words of Kotter and Cohen who said “Somewhere in the waves of change, you will have to attack the sturdy silos and difficult politics, or you won’t survive as a leader”.